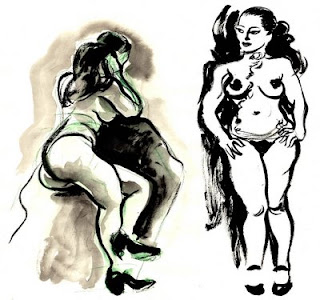 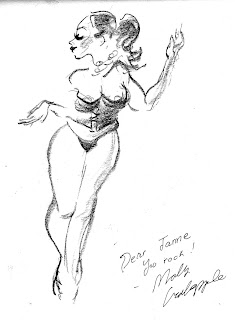 Helsinki Festival's large event, the traditional Night of the Arts was held again last friday. Among the night's numerous events was the Dr. Sketchy's Anti-Art School, organized again by the Burlesque Festival of Helsinki.
Thankfully I did find the time to pop in to do some drinking and drawing again. This time it was special because the founder of Dr. Sketchy's, Molly Crabapple was there to give a presentation about the phenomenon and her art. Then she performed for a packed class of artists a great show, celebrating Weimar Berlin. Boy, was she something ;)
Here's now a couple of my drawings again. Molly picked her favorites from a female and a male artist. I was pretty much in the front row of a packed room where it was hard for her to navigate so she didn't probably see the really good ones in the back and so instead, she picked mine! She also signed it for me. Which was nice.
The one she picked was actually my favourite too 'cause I did it in the start of the show, when she was dancing and moving. I didn't pay attention for the likeness but I think I did catch some feel of the elegance and movement. The others here were drawn from a still pose and because I had more time on my hands I tended to start overdoing them. Too much thinking will only slow you down!
Lähettänyt Janne Korsumäki klo 21:12 1 comment: Linkit tähän tekstiin 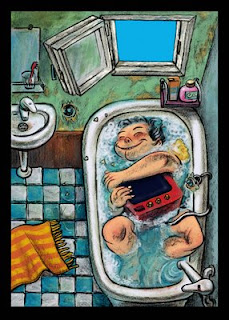 This is actually a kind of a new thing in this blog. The normal stuff that I've thrown around has been doodles, old stuff etc.

Picture's name is "Tollous" which translates roughly "stupidness of a jolly kind" :) I did it as an entry to a competition where the brief was to illustrate a poem by Arja Tiainen. The title was "Rakkaus koneisiin" = "The Love for Machines". I went the feeling route on illustrating it to avoid the word to word -type of illustration. It's still in the same universe as the poem :)

I didn't win any prizes but I was happy the get something done for a change and I got to be part of the classy exhibition surrounding the competition. The exhibition is open at the Art Museum of Mikkeli until the 21st of October so if you happen to be near the city, I recommend that you check it out.
Lähettänyt Janne Korsumäki klo 21:04 No comments: Linkit tähän tekstiin