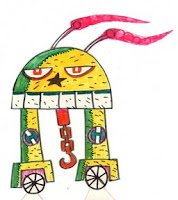 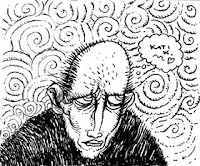 These are some products of some doodling at a bar with some like-minded people.
Lähettänyt Janne Korsumäki klo 17:47 No comments: Linkit tähän tekstiin

A Child Of Corn

Back again and this time with more recent stuff. I did this during our team planning half-day (I participated to the planning too :).

Whew, I'm finally pretty much done with the comic for a competition. It still would have needed a lot of tweaking but...Anyway it was great to draw some comics after several years but I wish I could have just concentrated on that. Drawing just on the evenings after work and any other activities sometimes was quite tough and because I drew so periodically, there are huge differences with the "quality" between pages and even between panels.
I'm not entirely satisfied with it but I learned a lot while doing it and it certainly was a step forward. I'm gonna do a better one next time :). Of course I'm only speaking about the art because I was happy with the script that Eija wrote.
I can't post any pages from that comic just yet 'cause the competition isn't finished so here's again some really old comic pages!
It's a really corny story (the opening line "there's 2 drugdealers inside & the door is open" made me laugh out loud) but think it doesn't look that bad even though I drew it 13 years ago.
It's of course in finnish but if there are foreign readers that actually want a translation on my deep and thoughtful script here, please leave a comment :) Pages are 1-4 starting from top left to right and second row from left to right.
Lähettänyt Janne Korsumäki klo 22:59 No comments: Linkit tähän tekstiin

Comics from a 15 year old

Wow, it's sometimes fun to run into the ooold stuff. The ones here are some of my really early ventures into comics. The gloomy execution bit I did when I was 15 years old...I must have had some issues :) But at least it's a complete "story".
The scifi/fantasy piece is done a little later, I don't know exactly when. However it's another of those really ambitious starts of mine that never got further than the first page.
I'll post some more pics from my early comics later. I'm actually working on a comic now after a few years break and I'm not sure if I've developed at all from the ones posted here :D
Lähettänyt Janne Korsumäki klo 00:12 No comments: Linkit tähän tekstiin