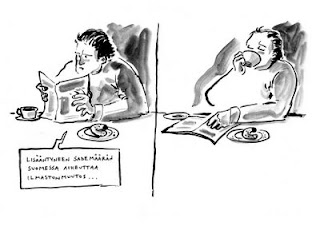 Updating the blog for a CHANGE! Another cartoon that did for the competition mentioned here. With this I skipped the sketching to avoid excess noodling which is apparent in the previous one.

Again, this was not intended as ha-ha funny. Partly 'cause I couldn't come up with one but because of the subject. So what do people (especially the 40-50's generation) still generally think or react when talking about the climate change. 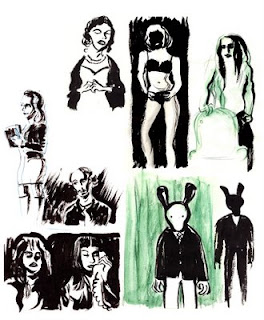 Heellooo, remember me? I just can't believe that I previously updated the blog in November! Obviously I didn't make any serious "I'll update my blog every week and be a good boy" -New Year's resolutions.
But hey! Happy New Year to everybody let's get this show on the road, ONCE again!

Last night was again Dr. Sketchy's Anti Art School session here in Helsinki. I must say, the show was the best one yet. It's gonna be hard to top this one. It was held in the Theatre Museum and on this little stage with red curtains we saw scenes from the movies of David Lynch come alive! Angelo Badalamenti's scores led the atmosphere as the permormers took poses in costumes that were all obviously hard work and commitment. Great job, thank you!

This time I was more just looking than drawing. The amount of decent art from me in this session is minimum.

There's this really tall guy in the Helsinki Burlesque crew that I just knew had to at some point appear before the red curtains. Wearing a white shirt and a red bowtie he stood in the spotlight and said: "It is happening again...it is happening again". I didn't even draw that classic scene since I was just staring and thinking "this is great!".

Of course there were interpretations but I think the Lost Highway "scene" with the girl looking like Patricia Arquette, holding the telephone in her hand as a menacing figure appeared behind her was spot on. A stark mood that I tried to capture in the very limited times that we had again on each scene.
Lähettänyt Janne Korsumäki klo 22:34 No comments: Linkit tähän tekstiin